Sebastien Saavedra finished the 2014 IndyCar series Driver’s Championship in 21st place, only finishing in the top ten once this year.

We’ll be doing a statistical breakdown of all of the drivers who ran in the 2014 IndyCar season, starting from the back of the points standings and ending with the championship winner, Will Power.  To view all of the driver breakdowns, click here. 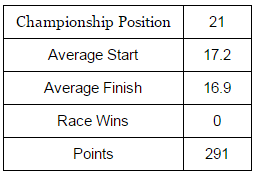 Sebastien Saavedra had a season to forget in 2014, never finishing a race above ninth.  Saavedra did achieve one pole position start this year, which came at the Indianapolis G.P. (which he would crash out of on lap one). His best result came at Long Beach where he was able to put his KVAFS racing machine into the top ten and lead three lap during the race.  Birmingham was the only other track where he was able to lead laps in 2014 (14 in total).

Sebastien Saavedra has no official plans or drive for 2015 yet, but his future in IndyCar is questionable after finishing outside 20th in the standings for the fifth year in a row. 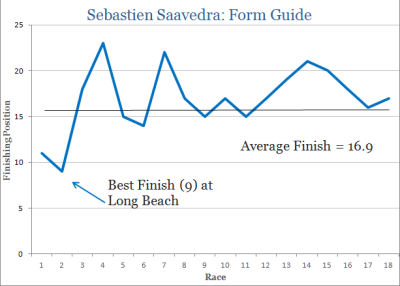