Saturday is always deemed an important day in the racing world. It’s the day qualifying takes place for the following day’s race, and the grid is set according to speed. But does it really matter where you qualify? How much of an impact does it have on the race? And does the type of track matter?

To figure out if it does indeed matter, I looked up the race winner of every IndyCar race at all tracks the series is heading to this year (2016) and noted their starting position. To start, I only looked at road/street courses because they are harder to pass at than ovals — I’ll be doing the same for ovals later. Making and graphing a histogram for all of the starting positions of race winners produces the following:

Starting from pole position gets you the race win 24.1 percent of the time compared to 12 and 13.9 percent from second and third places respectively. That means that the difference between starting in second and first is a 12.1 percent chance of winning. The increase from second to third could be purely random (the sample size is relatively small at 108 races), or it could have to do with having the inside line heading into the first turn. It could be beneficial to start right behind the leader on the “good” side of the track instead of next to the leader on the outside.
Fourth and fifth place grid positions are 13.9 and 11.1 percent chances, and the rest of field is below ten percent. No one has won an IndyCar race after starting in 14th, 18th, 21st, 23rd, or 24th — but that’s just random and not anything significant.
Oval Analysis
Doing the same analysis for ovals yields this graph: 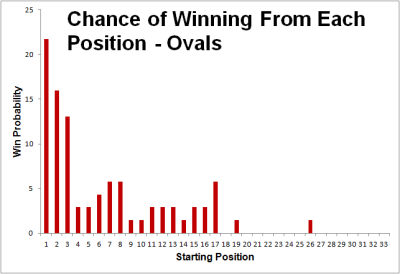 Starting on pole position on an oval is slightly less important than on the streets, with a win percentage of 21.7 — a 2.5 point difference. Second and third places have a 15.9 and 13 percent win probability. Both of these are higher than their street counterparts. After that, no place has a win probability greater than six percent. Eight, ninth, and seventeenth places are all just below that at 5.8 percent.
What We Learned
All in all, it actually looks pretty even between roads and ovals. Adding up the top three places’ win probability for both comes out to right around 50 percent for each. Expanding that to the top five places shows us some disparity though. The probability of a driver winning from one of the top five grid positions is 70.4 percent on the road/street courses. At ovals, that number is only 56.2.
Once you get out of the top five starting positions on an oval track, everybody starts to even out — this leaves the field (drivers starting lower than P5) with a 43.8 percent chance of winning. On streets, the field only has a 29.6 percent chance.
In both cases, starting up front does give you a definite advantage over the rest of the field. Ovals are more forgiving once you get past the top positions as the field evens out pretty well — the average place after P3 (up to P24, so it’s comparative to the road/street courses) has a 2.3 percent chance of winning.
-Drew

2 thoughts on “How important is qualifying position in IndyCar?”