Pit-stops are a frequent part of IndyCar races and an important part of strategy that teams need to consider due to the need to refuel in the IndyCar series and run laps on both the red and black tires during a road or street course race. On ovals or during wet races, teams do not have to run both the red and black tire but nevertheless teams still have to deal with pit strategy to refuel and switch off of worn tires. With timing data we have access to total lap times as well as times for individual sectors on the track which are based off of timing lines. By using this data we can look at multiple phases of the pit-stop process and analyze which drivers and teams are performing the best in each phase and overall.

There are a few important parts of the pit-stop process that I will be looking at today:

With these three measurements we can analyze and rank each driver/team combination to start to get an idea of who is the best in pit-stop scenarios. For the purposes of this analysis I only looked at green flag pit-stops so that all pit-in and pit-out laps could be compared equally. For each statistic I looked at the average time for that category across the whole race. So if a driver had three pit-in laps under green flag conditions, the number shown is their average time on those three laps. Below are the results for the 2022 St. Petersburg race:

Looking at the results the driver with the lowest average time spent in the pits was Josef Newgarden with an average of 33.498 seconds spent between the pit-in line and pit-out line. There were six other drivers within a second of Newgarden’s average which was actually far less than I would have predicted. I expected most of the field to be closer bunched together. One potential reason for this discrepancy is that drivers can be impacted on pit lane by other cars if they are forced to merge together or delay leaving the pit box due to traffic. Even with this in mind the range was still wider than I expected. This is only data from one race so it could be something to check out again in the future to see if that trend holds up and if the same drivers are at the top. If so, that could indicate that some drivers/teams have a consistent 1+ second advantage over others on pit lane which is huge over the course of a race with multiple stops. 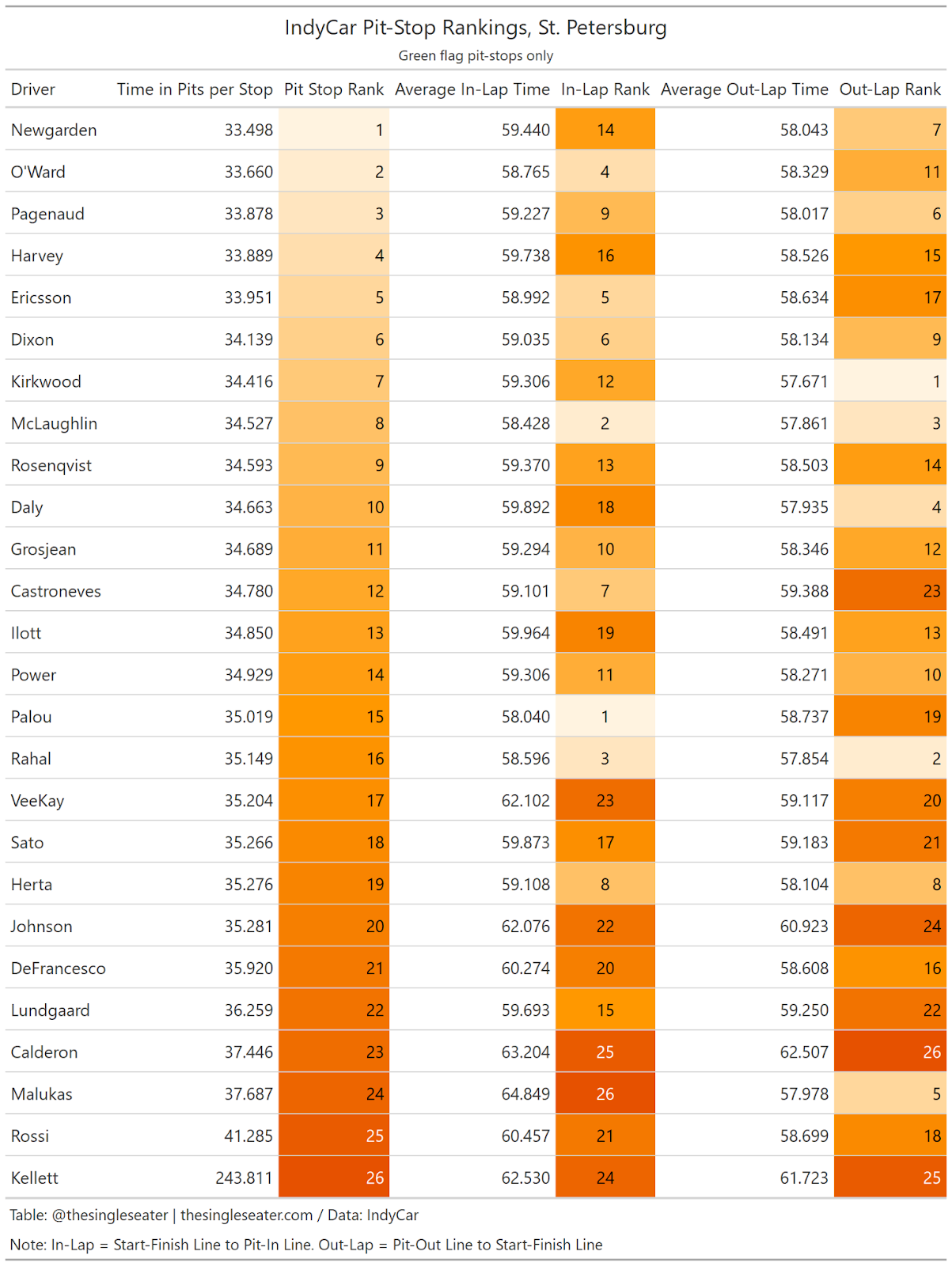 Looking at the average in-lap times we see Palou, McLaughlin, and Rahal in the top three of the rankings. Palou was 0.4 seconds faster on average than McLaughlin which is significant for a single lap. Just as with the time spent on pit lane, there is a wide range of times here for in-laps. I mentioned earlier that this can be impacted by traffic if drivers are held up on track, but regardless of whether a specific driver should be ranked higher/lower because of traffic in this specific race, the data shows how much time can be made up on just this lap. If a driver has a good in-lap vs. one that is slower due to skill or traffic, a 1-3 second advantage can easily be erased. Part of a strategist’s job is to get their driver in clear air on track, and this is part of that equation.

For out-lap times we see a surprising leader in Kirkwood, a rookie to the IndyCar series. His average out-lap time of 57.671 seconds is one of the five times under 58 seconds. Rahal also placed well in this category with the second best time. When looking across all three categories and taking the average ranking for each driver we can give a rough estimate of who had the best overall pit-stop performance at St. Petersburg. The leader is our race winner, McLaughlin, who had an average ranking of 4.3 across all three categories followed by O’Ward (5.6), Pagenaud (6), Kirkwood (6.6), and Dixon (7).

One thing I am particularly interested in studying is whether any or all of these categories are a repeatable skill. That is, will McLaughlin and Newgarden continue to be near the top of these categories, and will Kirkwood keep having really quick out-laps? With more data as races are run we can take a look at this question, and that will also help cancel out some of the confounding variables, such as whether a driver has traffic in front of them or not, that could impact the analysis of just a single race.

Getting access to the time a car is stationary in pit lane would also be beneficial to separate out driver skill vs. pit crew skill since they both play a part in the total time spent on pit lane. Overall, looking at these times we can see that pit-stops are an extremely important part of the race that can drastically increase or decrease an advantage. Whether due to skill, clean air, or both, having a good in-lap and out-lap can net you multiple seconds relative to other drivers in the race, and a clean and fast trip down pit lane is not a given. This isn’t necessarily groundbreaking and teams are aware of the importance, but it is beneficial to be able to quantify exactly how much it matters in a race, and hopefully it will have you paying attention to in-laps and out-laps a bit more going forward.