The third and final full length practice session has finished up at St. Pete and now teams will head out and qualify this afternoon. A few red flags came out this morning that took away some practice time, but every driver still got some solid time on the track on the black tires.

Here is the sector heatmap for the third practice session: 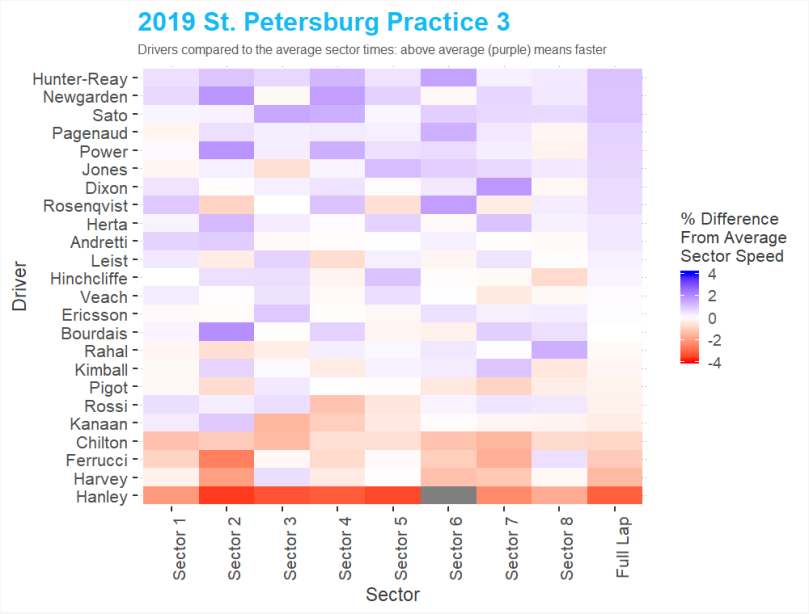 Hunter-Reay continued his good form we saw in the first two practice sessions and finished at the top of the time sheet. He was especially quick through sectors four and six which is great news for his team as both of those sections are very different technically. The former has some lower speed corners while the latter is medium/high speed corners. He has been consistently fast in those sections this weekend and that shows his car is fast and strong through two very different types of corners. He is my pick to get pole position today.

The Penske guys (Newgarden, Power, Pagenaud) finally picked up the pace in this session and all were in the top five. Despite their slow start in the earlier practice sessions it shouldn’t come as any surprise that they are figuring out how to run fast here at St. Pete. Sectors two and four are where Newgarden and Power seem to be making up most of their lap time, while Pagenaud has more of a consistent run throughout the whole lap with no sectors especially quick. Newgarden and Power could be running a similar setup to each other and it will be interesting to see which approach works best in qualifying. I wouldn’t be surprised to see Pagenaud’s sector times in two and four pick up during qualifying as the cars share data.

It’s hard to gauge exactly what different teams and drivers are working on in these practice sessions between long runs vs. seeing how fast they can go, so it’s always a good idea to look at all of the practice sessions together when trying to figure out what drivers are looking strong heading into qualifying and the race.

With that said, I expect Hunter-Reay and the Penske team to be strong this afternoon despite Penske’s slow start to the weekend, and also be on the lookout for Sato and Pigot to have good performances.