We’ve hit our first longer break of the IndyCar season, which gives us a good time to take a look at how the season has been playing out so far. Josef Newgarden leads both the actual points standings as well as in xPoints, which isn’t a big surprise given just how dominant he has been driving so far. He has been the most consistent driver all year in terms of the average deviation between his finishing positions, which is just 1.3 positions. The next best driver in terms of consistency, of those who have raced in all four of the first races, is Ed Jones at 3.1 positions. The difference between first and second should tell you a lot about how impressive Newgarden has been driving. 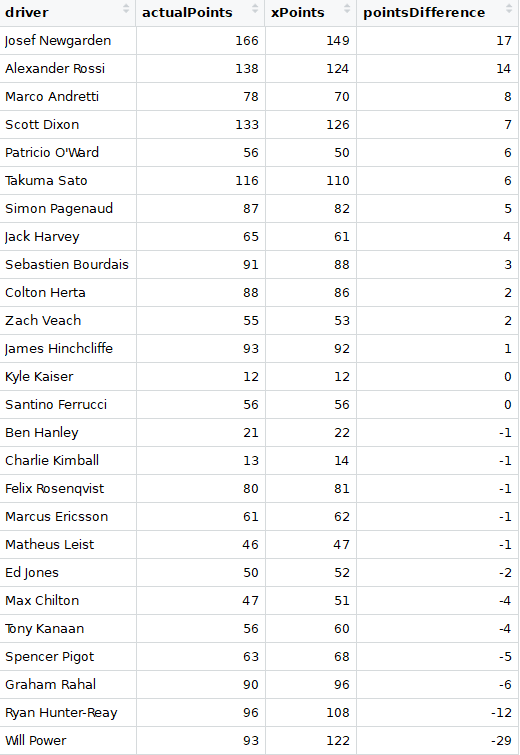 The biggest underachievers through four races have been Will Power and Ryan Hunter-Reay. These drivers both suffered big time mechanical failures in races where they were running well, and that caused them to score a lot less points than we would have expected. Newgarden is the biggest overachiever so far by 17 points, but that is nothing compared to Power’s -29 point difference. Newgarden has scored more points than we would have expected him to based on how he was running primarily because of Power’s DNF at COTA that catapulted him up a spot in the finishing order.

Right now there is no difference between the actual points standings and the xPoints standings, but that isn’t too surprising considering only four races have been run. There hasn’t been enough time for drivers to consistently over or under achieve.

Here are the best and worst performers in a few of the stats I’m tracking this year.